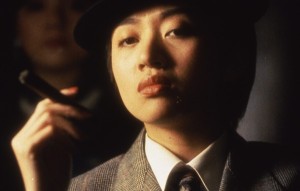 Above you is the image of Hong Kong actress Anita Mui. She is dressed in an archaic and masculine style because she is playing the role of Kawashima Yoshiko A.K.A. Jin Binhui, bith name Aisin Gioro Xianyu, a member of the extended family of the royal Qing Dynasty of China and a notorious spy and part time public figure in service of the Empire Japan in the 1930s. A movie, roughly but never completely inaccurately (as long as you are willing to forgive a few obviously fabricated scenes, everyone speaking Cantonese, and a couple kung fu movie style fistfights), based upon what we either know or suspect about her life. In the above image the actress captures a brazen attitude which defies typical East Asian gender and social norms. You can find the movie on youtube in fact.The fact that this role was based on a real person just makes her excellent portrayal all the more interesting.

Assuming that most of my audience are native English speakers (as stats imply) you most likely came across a portrayal of her in ‘The Last Emperor’ as the opium smoking pilot who bore a blood vendetta against Han Chinese for the disposal of her ethnicity and family from the ruling position of Chinese politics. This version shows effectively how she is viewed in China since the war, an unhinged traitor and a die hard collaborator. It was precisely what her trial for treason after the war sought to establish, and what she was executed for shortly before the fall of the Kuomintang in the Chinese Civil War. Never mind the fact that Chiang Kai Shek happily employed high ranking members of the occupying Japanese army in his command after 1945-an honest enemy perhaps is easier to stomach than a more amorphous one.

I recently finished the book ‘Manchu Princess, Japanese Spy’ by Phyllis Birnbaum. This post will not be about the book itself, though I did love it and gave it 5 stars on goodreads for thorough research and having equal parts of sympathy and criticism. Dealing with a fascinating character with a record of biographical self-distortion is no easy task. But it got me thinking that Ms. Kawashima would be good segue into the topic of a female trickster figure. Female tricksters are rare in mythology. Lewis Hyde and others have postulated on why this is. Often the conclusion is that the frequency and debilitating nature of pregnancy made such personality types less common in women in the pre-modern world.  They do exist, if rarely, in some tales. The Anasazi and the Navajo have a few female coyote tales, for instance. Almost always, these tales stand out for showcasing the female trickster as simply someone trying to get by in a cruel world-playing off people to get the best deal. This is really not so different from the male trickster in the end. Perhaps more importantly, tricksters of all genders are famous for their ability to walk a divided line, for males to take on female roles and vice-versa. As a subversive figure, tricksters never do what is conventional or safe.

That sums up Kawashima’s life. Her once royal family was devoid of power after the 1911 revolution and fell on hard times. Japanese spies operated throughout the country and set up links with them. To seal the bond she was given to a Japanese agent-one Kawashima Naniwa, to raise in Japan. Spending much of her formative years in Japan, the former princess would become a product of both worlds and also, in a way, of neither. Exposed to Japanese racism and an increasing sense of international chauvanism (not to mention possible abuse from her stepfather), she would return as an young adult to China. There, her accent and mannerisms would also mark her as an alien, not to mention the still virulent anti-Manchurian racism in Chinese society. After an abortive marriage into the Inner Mongolian royal family (or what passed for it) she became a bit of a drifter.

But this culturally liminal status would hardly be the most important factor in her life. In her final years in Japan she had crossed an even bigger barrier. She had decided to become a man. After a botched suicide attempt after a failed love affair she had shaved her head, began dressing as a man, and drunkenly cavorted in the streets using rough lower-class masculine language all while declaring herself to be male. She had decided that the world being what it was to women, that it would be better to make her way forward as a man.

After a few failed starts in Shanghai she ended up falling in with Japanese intelligence. She played some role in setting up the Shanghai incident and abducted the recalcitrant wife of Pu Yi, who was then preparing to be re-established as emperor in the Qing lineage of the then newly born Manchukuo, a puppet state under Japanese rule. Kawashima would claim that she stashed the Empress in the trunk of her Ford V-8 while roaring past the Chinese guards on her way to the docks in a daring night time chase.

After this, she was redeployed to her ostensible homeland. Crowned by the Japanese press as a ‘Joan of Arc of Manchuria’ she would be given a military commission and an anti-partisan cavalry militia to command around the same time the Kwantung army added Jehol to Manchurian territory. Upon viewing her ex-bandit unit for the first time she commented on how ugly they were and proceeded to drive out to attend a party with them in tow to make the guests uncomfortable.Though she did not fight in any conventional battles, she was supposedly wounded in a skirmish. Coupled with her bullet wound from her previous suicide attempt, this would lead her eventually towards drug dependency.

All this time she received Japanese military titles, Manchu noble titles, and sacks of cash from various well connected lovers and acquaintances. She claimed to perform feats of derring-do behind enemy lines which are not verifiable. No longer a secret agent she became a celebrity instead. She tore around Changchun’s streets in her giant car, hosted wild parties, and recorded her own album of Mongolian folk songs (which, to my immense sadness, I cannot find recordings of).

But as full scale war was launched across China proper the facade of Japanese-Manchurian collaboration broke down and the rampant exploitation of the people to serve the Kwantung Army became harder to ignore. Having fought for and achieved a place where mobs of Han nationalists could not threaten her place in society, she now found that her allies had become her enemies in their place.

Kawashima was no idiot nor a fawning collaborator. Since an early age she had been exposed to Japanese elitism. But as a lone individual who clearly wasn’t going to have a future in China she joined an enterprise she thought might at least benefit her. After all, one strange misfit amongst giant events can only do so much besides look out for herself. But as the situation got worse and her funding dried up she spoke out. According to her Japanese secretary: ‘She wasn’t a bad person, she liked causing a fuss […] She had bad feelings for Japan. She made fools of the Japanese authorities when she had nothing better to do.’

Using her radio program to mock military authorities, and quickly developing a trail of dangerous espionage linked ex lovers who were plotting her assassination, Kawashima took off and left Manchukuo for first Japan, and then Tianjin. There she kept a low profile running a restaurant into the ground and attending film screenings in full military uniform while loudly mocking the films in question. Her immense spy network and her increasing irrelevance protected her from Japanese agents, and she continued to criticize the powers that be. With the outbreak of the Pacific War she felt defeat was imminent and tried without success to open peace talks between Manchukuo and Chiang Kai Shek, who she increasingly came to see as the best hope for China.

The collapse of Japan in 1945 meant that many of her acquaintances urged her to flee there. She did not, spitefully awaiting her fate in Beijing. Having received no sympathy from either world she could not expect her life to be spared by either side. Perhaps she simply thought she had done rather well and led an interesting life despite the many odds against her.

She would still dispute her execution and imprisonment, as a Japanese raised Manchu she probably had a good case. But she had never been officially a Japanese citizen so she was executed anyway.

Those who are poorly integrated to convention are often crushed underfoot by our society. Sometimes they rise higher than expected because the situation is chaotic they can worm their way into places other people would dare to tread. Though working with Japanese militarists is not something which should either be forgotten or forgiven, her tale is one worth remembering. We do not get to choose the sides of struggles we are offered or even the state of our societies. Fate determines where we go more than our own efforts, the claims of fashionable contemporary western self-help dogma aside. But this hardly means we have to give up ourselves or blindly obey the trends of our times.

No matter how ugly the circumstances, carving a niche for oneself in eras like the Second World War is something few could do. The challenges for a woman must have been many times greater than that of man. As such an effective renegade, Kawashima deserves to be remembered as a proper real life trickster. Morally neutral and ambiguous to the end, full of boasting behavior and unverifiable exploits, she probably ended up seeing the world much more clearly through her opium haze than many of the unadventurous proper people of her time ever could have. In doing what she did she overturned the expectations of everyone. One cannot guess her motivations, but one can suspect that in the face of tragedy she realized she could not take life so seriously and decided to squeeze it for what it was worth. Just like those rare female trickster archetypes that exist from time to time. It was either that or keep one’s head down and behave.

As she said herself in one of her final letters from prison:

‘I had planned to distance myself from all attachments but I could not do it. Attachments are power and at the same time they are death. Only when you are dead do attachments fall away. While you alive they amount to nothing except to outstanding people, crazy people, and fools.’

She probably ticked all of those boxes.

One thought on “Kawashima Yoshiko: The Twentieth Century Female Trickster”