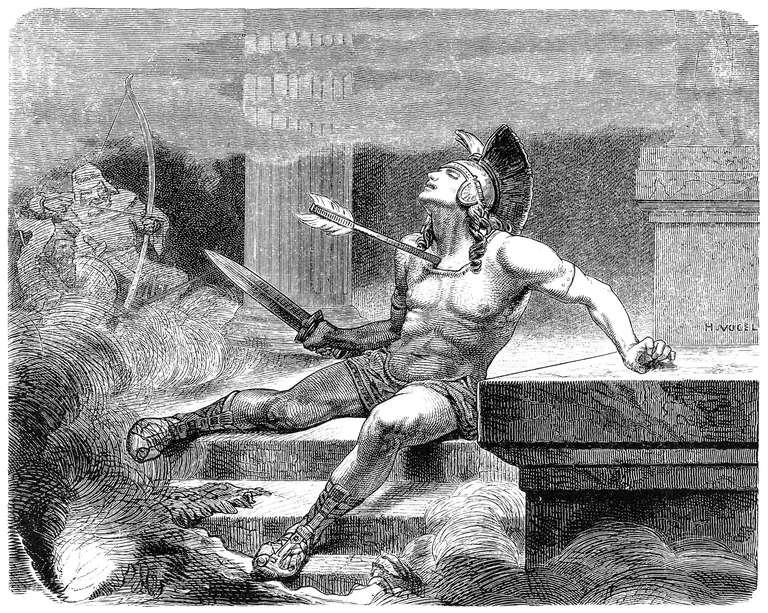 Victorian death portraits, like those above, are always so full of melodrama. But in the case of the historical figure of Alcibiades he would surely have appreciated such portrayals.

One of my original objectives was to regularly have a historical figure who meets the description of the mythological trickster as an entry. Well, it hasn’t been quite regular at all…in fact I believe the last time I properly did this was in 2015, but there is no one more deserving of coming back to the theme than Alcibiades.

I just recently finished David Stuttard’s excellent ‘Nemesis: Alcibiades and the Fall of Athens’ , which is a book I have been waiting for years to be written by someone. The book is chock full of citations and facts as you might expect from a university publication, but reads like a page turning biography. What Stuttard doesn’t know he doesn’t tell us and he leaves the many ambiguities of this famously amorphous figure as they are. What is known though, or can be surmised, is written up in both an educational and accessible manner. You really do get a feel for both the strangeness and later fascination for this most mercurial Athenian. In his time it was said that ‘in youth he enticed husbands from their wives, as a young man wives from husbands.’ He still entices historians to this day, if in a different way.

For a full biography read the book, but in what follows I wish to touch upon Alcibiades trickster like attributes as illustrated by key themes in his career.

Born into a wealthy if declining family of the Athenian aristocracy , Alcibiades was hardly someone who scrapped up from nothing at first but with his many massive changes of fortune he would come to prove his immense ability (and immense flaws) time and time again. Meritorious service with his mentor Socrates in the Peloponesian War would cause his star to rise as many of Athens’ elected and older warriors stumbled into death or obscurity. The war itself was a time for all kinds of varied fates, as Athens and its allies and vassals struggled with Sparta and its allies and vassals for mastery over Greece. The common front posed by a Persian threat had long since departed (or so was thought), and Athens had benefited the most from their withdrawal from Europe, building its own wealthy commercial empire founded on a core of naval prowess. Eventually, Athens overreached, and the city states not wanting to bow her way looked to Sparta.

Most of the history of the war was a stalemate, but as the Greek city states in Sicily began to enter the periphery of the conflict (especially by supplying food to Sparta) many of the leaders came to imagine a knockout blow against the Spartans. An invasion of Sicily, a seizure of Sparta’s biggest trade partner, and the empowerment of Athenian allies. Sparta could then be starved and blockaded into submission and the groundwork for expansion into the western Mediterranean would be laid. Overly ambitious perhaps, but the only navy that could challenge Athens at this point was Carthage, who also hated Syracuse was was too far west to yet matter.

Alcibiades had proven himself a strongly divisive figure, a hateful hot head to his enemies and a great benefactor of his friends. He was known for stealing fancy silverware to pass as his own and then sneaking it back to the owners once an esteemed guest was gone. His bravery on the battlefield was matched by his legal and social perfidy. Not everyone wanted him in command of the attack on Syracuse, and furthermore, not everyone wanted a risky attack on Syracuse in the first place.

Before he left, various statues of Hermes were vandalized. People whispered he, as a notorious indifferentist to the gods, had done so. Most likely it was either someone trying to stop the invasion in general (be it Spartan agent or Athenian who feared the results) or trying to sabotage Alcibiades in particular. Of course, there really is no real known motive here. A bad omen is bad for him as well as the city, but the tongues flapped. Before more could be made of it, Alcibiades left Athens with fleet and invasion in tow, seized a coastal town in Sicily, and began to lay out a plan to take Syracuse and link up with her enemies on the island. That is when the news came that he was going to be recalled for trial. If found guilty he would be executed, if not he would still lose command and possibly never be given another one. He escaped.

He was an outlaw on the run now. And at this point when most might give up and disappear into obscurity, that he really began to shine. He defected to Sparta. He had, after all, intimate knowledge of the Athenian plans and dispositions in Sicily. The Spartans sent a general, armed with this information, to aid the Syracusians, and soon the entire Athenian force of troops and ships alike was killed or captured.

Alcibiades was a dashing presence at the rustic Spartan court and soon he seduced the Spartan King’s wife and fathered a son by her (not as bad a thing to have happen in Spartan culture as you might think, but Alcibiades rankled many nonetheless). He was able to recommend ways to best use Sparta’s fledgling navy to conduct raids on Athenian holdings that just so happened to belong to his wealthiest rivals back home.

This gave him Persian contacts with local satraps in Anatolia as Sparta and Persia were now growing closer as the war dragged on. Once the tide of ruling class opinion in Sparta turned against Alcibiades, he was able to escape once again to Persia, where he befriended the satrap Chiththarna. For over a year he tended gardens and lived in luxury while advising the Persians on how to drag out the war as long as possible to weaken both parties to the point that Persia could get its lost coastal and island provinces returned.

The Athenians, meanwhile, made moved from disaster to disaster. They had finally seen how effective Alcibiades was as a commander but mostly from the wrong side. Internal turmoil enabled some to put out feelers to him about returning. When the Athenian navy off the coast of Anatolia broke out in revolt against the government Alcibiades rode to take command of them and proceeded to defeat the Spartan navy and seize several ports from them. When the regime changed at home he could sail back, a hero. Naturally, he had waited to see which faction came out on top.

Back in Athens he would alternate between naval command (and taking back and securing the Bosporus to secure grain supplies) and living his decadent life back in the city. He campaigned with and secured an alliance from Thrace as well. All this made him more popular than ever before-and this bothered his enemies whom he had both humiliated and also directly attacked before with the Spartans. He was so popular people would beg him to the street to take charge of the city as a tyrant. The forces against him would surely act the second a chink in his armor was made. Finally, luck swung their way. Alcibiades’ led a campaign that deadlocked for him and ended in catastrophe for his subordinate. The war had swung back in the Spartan’s favor now that Persian gold flooded into their coffers. Alcibiades was banished-again.

He had come to hate the buzzkill Spartans and could not trust the Persians who were now firmly in their camp, but he still had one last trick up his sleeve. He now defected as a mercenary commander to Thrace, the one kingdom that still had love for him. He proceeded to expand the kingdom and take some fortresses for himself, amassing great wealth at the expense of conquered tribes there. The situation was ripe for a perfectly solid retirement. Many of his friends, lovers, and family had joined him and the government was friendly. He even got to see Athens final naval humiliation from one of his forts in a battle where he either rode down and offered to take command or just to give advice. He was jeered off and the Athenians would go on to lose.

But with the end of the war others turned to settling scores. The Athenian puppet government under Spartan command demanded the death of anyone who would rally opposition, and Sparta obliged by sending a request to the Persians as it had been learned he was traveling in their territory. He was set upon and killed in the night.

Later figures, especially in the future Roman Empire, would take quite a shine to this bizarre figure. The reasons I take a shine to him are as follows:

Balls of Steel: Trickster type figures are often stereotyped as cowards, but this is not always the case. Alcibiades personified this with his commended service as a hoplite and then as a cavalry commander who always led from the front. He developed a loyal following based of his ability to take personal risks, including diplomatically. Often, he would take a city by offering to negotiate solo within their walls and convince the place to surrender without a fight. One time he stormed a city with an inferior force. Realizing as the enemy bore down that they outnumbered him he pretended to issue orders to units in the dark which were not there and then called on the enemy to surrender for they were surrounded. It worked.

Loyalty to the Art First: Considering he only left Athens when he had to and was still willing to come back to it, one cannot consider him a straight out traitor per se. He was Athenian first but flexible. He followed his skills-the art of strategy-above regional loyalty. This was a practice common among many talented generals and diplomats all the way up to the 19th Century. It barely exists today. The trickster is always ‘moving along’ and retains few if any loyalties that get in the way of personal gain or getting one up on one’s enemies.

Undone by Appetite: Alcibiades was often undone, like most tricksters, by a voracious appetite. Be it sex, food, luxury goods, fame, revenge. He checked all the boxes.

One thought on “Alcibiades: Trickster and Folk Hero of the Classical Era”