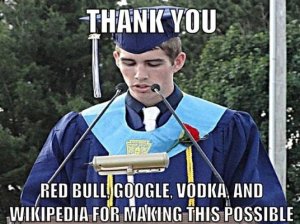 I understand late Friday night is the absolutely worst time to write a blog entry, but this realization just came into my head and I feel a very strong urge to write about it as soon as possible.

Assuming you like to discuss the humanities, especially as it relates to political theory and international relations, you should be versed in a few topics. The most important of which is history. Unless of course you are into political theories that begin with the prefix of ‘post’ in which case you base your opinions on your feelings and nothing else. But by and large, before philosophy and theorizing must come history. You must have actual case studies with which to point to in order to justify your conclusions. This world is built on the contexts of the past-so history is also vital to understanding even the most contemporary events. Naturally, a good political discussion on big issues, particularly international ones, should turn to history in order to actually get at the meat of things.

Ah, but here enters the scourge of such discussions. The malignant plague which casts an odious miasma all over such potentially rewarding discussions: the Basic History Bro, abbreviated here on out as BHB. We will be examining the American variant in detail.

What is a BHB? Well, a BHB is a variant of the Edgy Contrarian Hipster we all know who once saw a Michael Moore documentary or read Howard Zinn and now pointedly tells you the most basic and quotidian of ‘did you knows’ (that yes, in fact, you do already know and more) in an attempt to prove their intellectual chops. Many of these kinds go into hiding after the tits-up combustion of their various internet fad causes only to emerge with the next one and we all have enough experience with them not to need further elaboration. But the BHB is something even worse. The BHB is like an Edgy Contrarian Hipster except that its nuggets of wisdom are not even vaguely contrarian or critical in a superficial way-but rather are outright proclamations copy/pasted from half-remembered high school history classes and from History Channel documentaries from back when those still existed as anything other than rednecks in garage sales badly reenacting their alien abductions at the hands of the Reptilian Illuminati commanded Sasquatch armies. (So…pre 2006 then?) The most amount of actual research they could ever be bothered to do is read a wikipedia page. And even then that is only likely to happen for a few select topics such as the Second World War. The BHB in other words, spouts the propaganda of the dominant society and political class without even collecting a paycheck.

What makes the BHB particularly loathsome is that it always sabotages an interesting conversation and requires you to take the time to point out why their points are invalid or simply public mythology instead of history. At which case their brittle machismo will be offended and they will change the topic of the conversation in order to make guesses on what kind of commie queer you are. Some examples:

Bring up the Eastern Front of WWII: ‘The USSR was as bad/worse than Germany.’

Bring up any non-western nation: (insert comment about being backwards here no matter the time period even if its one where the opposite is more likely to be true).

Bring up any decision or action by the United States critically: ‘Yeah well (X nation) is worse.’

Bring up any decision or action by a competing power with approval which existed at the same time as the United States: ‘Yeah well America did it better/got them back.’

Bring up the ancient world and you get a whole slew of fun from ‘Rome is America’ to ‘Spartans OMG Spartans the best warriors ever!!!!!!!’ And always make sure to add ‘when men were men’ to any time period which is so unfortunate as to attract the BHB’s superficial attention.

And yes of course, their most heinous of crimes, the BHB takes ‘Deadliest Warrior’ and ‘Cracked’ history articles seriously. This alone is a crime worthy of capital punishment to anyone who has ever actually done historical research, worked with primary sources, or realizes how you appraise events.

BHBs, in my experience anyway, are uniformly white and male. I imagine that this is not always the case, but I personally have yet to see this categorization debunked with my own eyes. Unlike most bros, however, this one does not fit into a specific age category in the slightest. In fact, the range of its demographic age can vary as wildly as college freshmen all the way to exactly where you would expect.

What motivates the BHB? Why is he the way he is? Why is his toxic and soul crushing basic-ness injected into history more than any other intellectual topic? I believe I have a theory.

The Basic History Bro is lazy and insecure. Too lazy to actually do the work to justify their view point they go to the one which is most ‘sensible’, which just so happens to be the one which can be validated by the largest amount of people in the society where they dwell. Naturally, any non-majority view point can be ganged up in packs so there is little chance of retaliation which can override herd consensus. This also means they do not have to be well read.

The BHB is also-completely at odds with self-proclaimed sensibility I might add-deeply and emotionally invested in the mythology which he upholds. Since he is unwilling to go looking for badasses and ‘good guys’ on his own he must cling to the ones he has already been exposed to by the media and baseline education. Any criticism or questioning of these totems is tantamount to heresy and treason and is a vital threat to this core lazy-insecurity.

I spoke mainly of the American one which I know so well, but 5 years living in the UK means I also know of the British version, which has a particular dress code, a fawning obsession with ole MagsThatch, and devours books on the Falklands War, The Duke of Marlborough, and the Battle of Britain (titles often running into the bombastic ‘Bombers O’Clock! With Rufus Tiddleywinks and the Bally-Ho Squadron Against Jolly Ole Jerry, Wot’) and therefore fancies themselves informed. One thing the US and UK BHBs have in common though is fawning admiration for heroes from antiquity (the European ones, of course) and sometimes also Victorian imperialists who asserted white dominion over Africa (though this is never directly acknowledged as a motivation, but rather wrapped in ‘men were men then’ etc). I am sure other countries have similar creatures. Swedes and Koreans love to troll internet forums reminding everyone how powerful they once supposedly were, etc.

And that takes us to the inevitable question. Why criticize BHBs so much? We have all met them and been forced to speak to them as if they were children, what is the big deal? Basic is as basic does, even when it tries to have political opinions.

The answer is that this group of people, though intellectually marginal, is a dominant consumer of media and a large voting bloc. They are a concern and we can see why in Russia, where the equivalent of BHBs are already being mobilized to serve the interests of the governing class there. The ensuing result of this romantization of basicness in the form of the vatnik is…well…just turn on Russia Today and see for yourself. Sure we can imagine Fox News going there in a future where Bill O’Reilly and Sean Hannity make bets and host ‘Deadliest Warrior’ duels, but imagine all of the major news networks sinking to that level. If you think they won’t I perhaps must remind you that MSNBC tried to out Fox Fox with Alan Keyes and others before it embraced milquetoast liberalism as a brand.

The bovine simplicity of the Basic History Bro belies something potentially more insidious. In the age of perpetual outrage and pet causes it is only one grumpy brittle ego away from being harnessed as a mass movement.

May I also, while vaguely on the topic, recommend this excellent blog since I already cited something the author wrote.

I was thinking of posting a Smash Mouth song as a troll and to stay in the Bro theme, but even I am not that cruel. So, in closing, let me simply say good night, and keep on defying the basic.

2 thoughts on “Basic History Bros: The Scourge of Public Discussion”