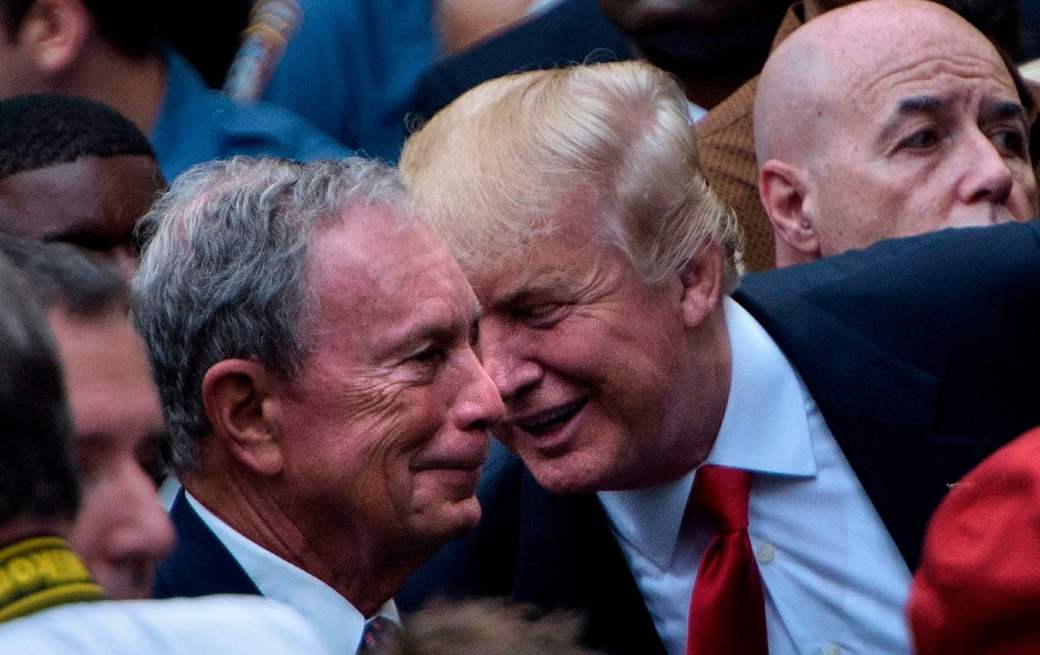 Here we are. After years of the professional managerial class moaning about violated norms and decorum, those very same people are now turning towards a figure as personally odious as Trump and on policy arguably much worse in order to save them. Save them from what? The systemic breakdown of a dying neoliberal order is the correct answer but these aggressive presentists only see one incredibly dumb man in the White House as the source of all the woes. Get rid of him and it all goes back to normal, they think. Never mind that Trump is a product of all those normal policies that got us here in the first place. Orange Man Bad.

But these are not people who read books of history and political philosophy to inform their world view, but rather react to cable news and fictionalized portrayals of politics as seen in the pablum of Aaron Sorkin style programs. They overestimate their popularity and appeal because they all consume the same media, attend the same cocktail parties, and yes, share the same class interests. Consider the track record of the neoliberal centrist in the 21rst Century. Gore, Kerry, Romney, (H) Clinton all lost the presidency. Obama ran as a reforming outsider but once that was shown to be a false claim he oversaw the greatest loss of Democratic seats in the legislature in generations and only won re-election because his opponent was such a cartoonish parody of the plutocrat class. Hawkish centrists perform terribly not just on policy but in national elections. Meanwhile, the policies of Reagan and Clinton that the center defends makes the poorer more poor, the rich more rich, and environment more degraded, and the living standards and sustainability of developed countries more and more precarious and less and less developed. Feudalism returns through tech and finance with a shiny new woke veneer. These are processes enabled and abetted by the bipartisan establishment, its most fanatical elements are the lingering miasma of Paul Ryan’s disastrous tenure in governance.

And who best represents these bipartisan liches now that Ryan has slunk off into obscurity, perhaps hoping to be forgotten about as the tides of both parties turn against him? Michael Bloomberg.

Bloomberg’s tenure as mayor was like the Bush-Obama years in exaggerated microcosm. An already existing mass surveillance state  was greatly expanded into something that would have made East Germany’s Stasi shudder in unease. Stop and Frisk policies and his eugenics-level disdain for local minorities under his governance are quite famous criticisms of him already so I feel little need to elaborate on them further here. Perhaps more shocking to those not in the know is his depths of sexist ranting which borders on sexual harassment. I thought a major part of the liberal critique of Trump was his misogyny, but his own terrible record on the issue pales in comparison to Bloomberg’s in sheer frequency and vindictiveness.

Then of course comes the terrifying idea of one billionaire president being exchanged for another. Worse, Trump at least ran a pretty bare bones campaign reliant on donations. Clinton outspent him on the campaign trail nearly two to one. Being the grifter he is, he actually spent very little of his own money on running for office. Bloomberg, on the other hand, is purchasing media left and right directly with very little campaigning or small donor support. He is buying his presence in this election in a way beyond anything seen before. The Norms Nerds who tend to be sympathetic to his run should consider that this is more norm-busting than anything yet seen in American politics. If allowed to triumph it may well end any remaining checks we have on the ruling classes and usher in a new era of techno-feudalism, where all major political parties are beholden to different oligarchic patrons based on the social issues/values they espouse and literally nothing else. A never ending culture war to keep the proles divided and prevent any unification against their Lords and Ladies.

Considering Trump’s rampant racism and the horror he has inflicted (particularly on the southern border), one could still make the argument that Bloomberg and Trump are tied. But we haven’t even gotten to the meat of my argument. This is an internationally focused blog foremost, and in Bloomberg’s foreign policy views we find the true horror of his candidacy.

To say Bloomberg is an arch-Zionist even by American standards is nothing new. One suspects that everyone skeptical of just how close the U.S.-Israeli alliance is knows this. But his rampant neoconservatism remains largely unchecked by a media class who remain one of the few constituencies left in contemporary America where sympathy for that ideology runs rampant. Bloomberg was an ardent supporter of the Iraq War and still is, despite everything that has happened since from the expansion of Iranian influence in the region to the rise of ISIS-neither of which could not have happened without the American invasion of Iraq. He has come out for the other disastrous American regime change operations, whether they ‘succeeded’ like in Libya  where slave markets are now commonplace or clearly failed (at great cost to everyone but Al Qaeda and defense contractors) in Syria. He would most likely deploy military forces to Venezuela under the guise of helping our generation’s Pu Yi in Juan Guaido and probably not have even Trump’s ability to step back from the brink when shooting incidents happen between the U.S. and Iran. Regime change wars in the 21rst Century have been a universal failure for America and they must be stopped for our sake and the rest of the world’s. As we have seen time and time again, they also exacerbate the refugee crisis which in turn increases the appeal of the far right and racist politics in developed countries. Bloomberg would be at least as hawkish as Hillary Clinton on these issues. Hillary Clinton, who many independent voters (myself included) did not find a ‘lesser evil’ to Trump specifically because of foreign policy issues-the most important issues handled by the president it must be remembered- also tended to lose swing districts where war casualties were highest.

Do I think Bloomberg is likely to win the democratic nomination? Not particularly. But I do think he has a better chance at it than some others. Democrats seem not to understand that independent voters are not necessarily centrists. I am not, and I find most of the disdain for the democrats to come from precisely that they are the centrist party. I know for a fact that I am not alone here. But the party is convinced a hyper-centrist is always the best option. No, getting voter turnout with independents is…something Obama did as a relative outsider but not Hillary as the penultimate insider. Bloomberg would do the opposite of this.

I think Bloomberg has an even smaller chance of winning the general election than in the democratic primary. He is probably the exact kind of candidate that Trump wants to run against in a general election-out of touch, no organic support, a clear representative of the failed policies both parties support and thus a perfect foil for anti-establishment times. I remember an Ann Coulter (of all people) quote from the 2012 election. ‘If we don’t run Chris Christie, Romney will be the nominee and we will lose.’ It is looking like you can take that quote into today, switch its party and replace Christie with Bernie (or even anyone not Bloomberg at this point) and Romney with Bloomberg.

But lets say Bloomberg (Boomerberg?) pulls it off and buys not only the primary but the general election. What could we expect? Here is just a little list off the top of my head:

On the bright side maybe it will prove accelerationism to be true and we will get a true political revolution down the line? But most likely people will be so beaten down and disaffected that politics will just divorce itself from the daily struggle to survive for most people. Full banana republic mode.

Keeping these factors in mind, it is extremely likely that a Bloomberg presidency would in fact be worse than a Trump second term. He would be able to ‘bring together’ the worst people of each party and marginalize the few remaining best. He would empower the far right as a seemingly ‘credible’ opposition while discrediting most others by virtue of now being a democrat. This leads me to believe that a second Trump term (preferably handicapped by democratic control of the house and senate of course) would be a significantly less terrifying prospect than a Bloomberg presidency.

Trump is the weakest and least effective American president since Jimmy Carter. If Bloomberg is the alternative and promising that ‘Mike can get it done’ should we be in such a hurry to replace him?

4 thoughts on “Bloomberg is the Greater Evil”