As you probably know, Stranger Things is quite the thing these days. For once, a popular trend I can thoroughly get behind to boot. I haven’t indulged in any television commentary since what is probably my largest entry, on Deep Space 9, as very little TV is interesting to me or overlaps with topics worth going into detail over if it is. But I really don’t want to go into detail about Stranger Things in particular so much as use its reflection of one of my hobbies and the greater societal reaction-at least initially-to that hobby.

The shows seasons, so far, depict a time before I was born (even if the second season is only months away) and yet still so accurately depict the tabletop roleplaying middle schooler world which I was part of over a decade later. Before the internet was fast enough to reliably have all forms of entertainment on command in a convenient package, the tabletop roleplaying game served the multiplayer needs of those seeking dynamic, impromptu role playing experiences with friends. Of course, it still does, and its popularity if anything seems to have grown in time even with the greater convenience and sophistication of the electronic forms of gaming in the role-playing field. In addition to the obvious bonus of it being better to set mood and tone in person, it also seems like the tabletop can provide a greater level of authenticity and a break from so many of our indoor entertainments.

It wasn’t always so. In the mid-80s time that Stranger Things depicts roleplaying games, especially Dungeons and Dragons, was new and innovative. While recruiting agencies for child actors quickly saw the advantage of a dynamic rules-based system for innovation, on the spot problem solving, and basic tactics in teamwork, numerous hypochondriac parents saw a terrifying moral panic. DnD and other games were linked to Satanism, suicide, and criminal behavior-without a shred of evidence-in a first round of cultural wars waged perpetually throughout American history by the recurring trend of willful know-nothings of American conservatism. This was in congruence, of course, with the famous pursuit of out of touch politicians (chief among them the Gores) against heavy metal and hip hop as well. But while that campaign is rightly infamous in history for its ridiculousness and naivete, many people forget about the even more hysterical movement against roleplaying games in general.

There was a certain extra emphasis, in the time, of the danger of DnD and similar games that went outside just the casserole-quaffing church ladies and easily sensationalized news-manipulated suburban parents. It was a more general phenomenon, sucking in the apolitical and the ostensibly progressive as well. Keep in mind that the 80s was the decade where Baby Boomers first started becoming one of the more politically powerful constituencies, which in turn mean a lot of ageing ex-hippies. In other words, many people who thought the ideal youth was ‘peace and love mannnnnnn’ had to confront that subcultures existed where children fantasized about becoming characters they invented, going underground (or wherever) armed to the teeth to slay scary monsters. Nevermind that this had been a significant part of both children’s literature and mythology since probably prehistory, an imagination used for something other than relentless positivity by children older than was normally considered acceptable to ‘play pretend’ was a dangerous imagination.

But games like DnD did more than become a creepy new fad to fuss over for navel-gazing parents. They challenged the entire world view of what was fast becoming the new dominant political culture of the times: neoliberalism. Whereas the 80s and 90s would be about rampant individualism, faith in market forces, and the belief that society was running forward to a new and glorious cosmopolitan and global future, many fantasy settings show a world filled with crumbling ruins of civilizations and technologies too numerous to speak of which all in the end collapsed. The treasures of the past are the only way to circumvent a rigid class system or regional poverty, and require skill and the facing of danger to unearth. Rotten monsters crawl in formerly glorious ruins either as all that remains of past civilizations or perhaps simply the first scavengers to arrive at the charnel house. In such a world, only teamwork, group solidarity, and risk taking can possibly succeed for those not born with a silver spoon in their mouths. Ibn Khaldun would be proud.

Spoiler Alert: it turns out this was a more realistic vision of the future than the one pushed by that era’s political and cultural elite. Perhaps this was the reason that it struck so many as a heretical and threatening activity, at least on a subconscious level. After all, policy makers had the ability to see that less money was being spent on public infrastructure, and that crime was spiking to record breaking levels. What they lacked was the ability to see that perhaps it was they who had more responsibility for that state of affairs than some kids seeking to escape the first stages of Hellworld currently then being fashioned by their elders. After all, a world filled with monsters the luck of the dice and some smart character building can slay is a world far more filled with hope than our own for many people.

So, why don’t we sell the line that RPG’s are a recruiting tool for critical thinkers and those to challenge the status quo? I mean, younger generations are far less into individualism and capitalism than anyone previous since the Great Depression, and now people are used to the cyber realm having all sorts of things but largely confined to slactivism. After all, groups of young people, meeting in ‘meat space’ in shadowy locations to learn communal action against the odds—all while a show that popularizes the idea that adults and authority figures are either clueless or malignant and it’s up to the youth to take action is popular-could be once again labeled as a threatening thing. And if it was so…its coolness factor would increase exponentially like an album with an explicit content label and the inevitable reaction from the perpetually out of touch would be at least hilarious, if not further engaging to recruitment for those opposed to them.

As Dustin said in Season 2’s finale: ‘If one member of the party is danger, the whole party acts’ (from memory, not exact quote). And as the newest member of the party, Max, showed, you have to earn your place by fighting for the community and showing your outsider status…but once you do…

And we can always hope that on a future season of Stranger Things, Jerry Fallwell or Tipper Gore is the monster. 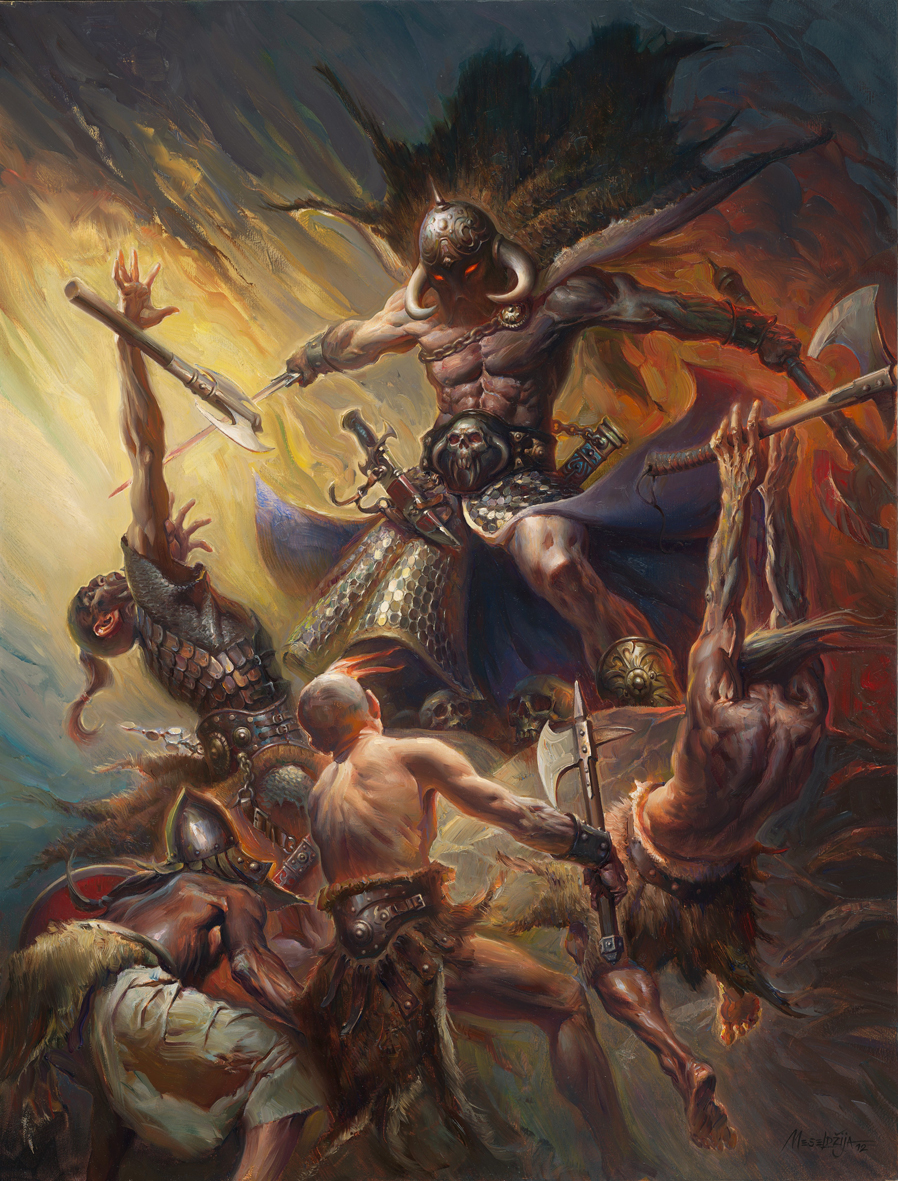 The Death Dealer, because

One thought on “The Glorious Subversion of Tabletop Roleplaying”