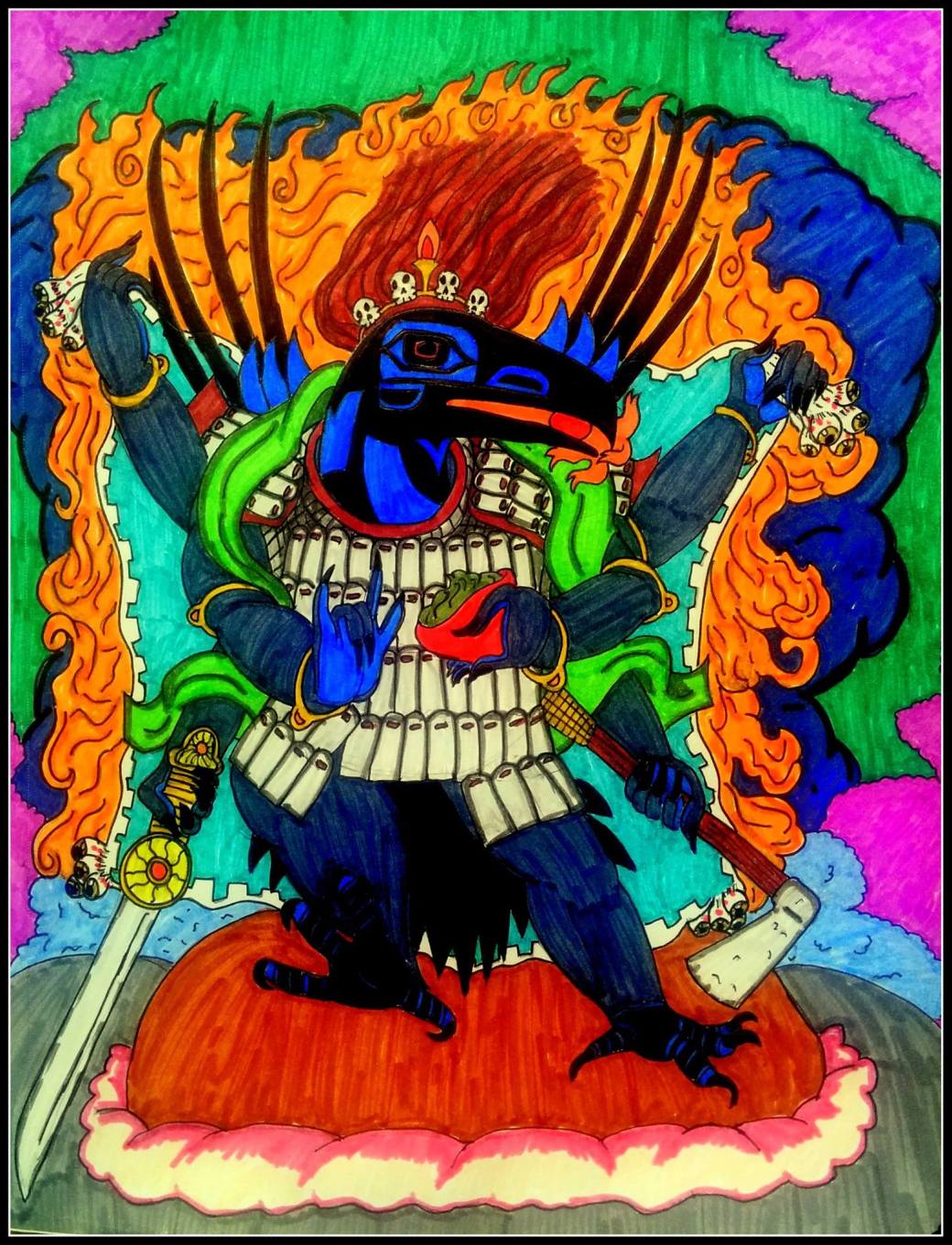 My own depiction of Pacific Northwest Raven as a Tibetan wrathful Bodhisattva, or perhaps anti-Bodhisattva.

Concurrent with my 3 years of delving into speculative realist philosophy has been a simultaneous exploration of the historical intellectual thought in Buddhist and Hindu traditions. I remain as much a materialist and atheist as I have ever been, but find the intellectual journey of these religions far more interesting than that of the Abrahamic faiths I have been surrounded by for most of my life. In some ways I believe they can show glimpses of what intellectual life would be like in the western half of Eurasia (and its descended colonies) were it not for the rise of Christianity. Particularly in Japan, Mongolia, and China, where foreign religions largely integrated with pre-existing polytheism rather than simply replacing or expunging them. The only places in the west where such syncretism occurred is in Afro-Caribbean influenced places, some Native American modern beliefs, and New Orleans voodoo-and those of course are heavily dominated by surrounding Christian cultures.

Hinduism had outright atheistic and materialistic schools of thought, and Buddhism denies the immutable soul and upholds philosophical inquiry as dialectic exchange. Certain concepts, such as ‘Indra’s Web’ (shared by both), a concept of the universe as a web containing droplets where each droplet reflects the others ad infinitum, have a remarkable level of confluence with Whitehead’s process theory or to be much more contemporary Bryant’s ‘democracy of objects’- with the notable exception that the philosophical trends are expressed materialistic, and the religious concepts usually are the opposite. Still, much of this way of thinking effectively did not exist in the west from late antiquity until Shopenhauer and its interesting to follow its trends as thought in parts of the world where it was in effect never interrupted.

This bring me to my main point here with the post, and its a problem I have with both process theory and other adjacent to the new speculative turn schools of thought as well as those eastern religions. The problem is quite simple: sure the universe is all interconnected, but this certainly does not mean that it is all *one*.

One of the reasons I have always been partial to hard polytheistic cosmologies as cultural complex is because while there is the acknowledgement that the pantheon of (I would hold, symbolic) figures all takes place in the same world, they are fundamentally different and sometimes at odds. While many philosophical trends, secular and eastern, are superior to the brute certitude and absolutism of Abrahamism, they still can’t quite bring themselves to see the power of chaos and repulsion. In fact, repulsion seems one of the few universal values that can be said to observably exist.

I generally find metaphysics that are not grounded in actual science or natural philosophy to be nothing but faffing about and New Agey nonsense, and fortunately my background in being an astronomy nerd is in fact much longer and more robust than that of philosophy. Dark Energy, so far considered the dominant force of our universe, immediately comes to mind. If the concept of negative mass can be proven it will contribute to this. The fact that gravity is universal and omnipresent, but also weak compared to the forces of energy (dark or otherwise) also makes a case of interconnections not being enough to overcome repulsion. But this is, first and foremost, a humanities blog and there the immediate effects of repulsion seem most obvious.

In international relations we find the natural desire for all states, no matter their official ideological inclination, to balance and counter-balance each other so as to maintain the maximum freedom of action in an anarchic inter-state world that is possible. In culture and politics we see competition leading to rivalry which leads to divergence, and unity only possible when a majority is willing to countenance the use of force to keep such unity alive. Societal bonds break down both for oppression from an increasingly alien ruling class as well as in times of immense complacency and opulence. New mergers are often only possible when two groups fear a third group more, in which case unity itself is the product of an even higher level of repulsion. Foreign attack or invasion is the best way to create unity, because the level of general repulsion is often held to be greater than that which occurs naturally within a society when not under existential threat. When things are left to their natural anarchic state, repulsion is the norm. It is unity that is the artificial construct and temporary state, beneficial as it can often be. But repulsion seems to be the baseline all is working from on the macro-scale. As the Arab proverb goes (paraphrasing here): ‘My country against other countries, my region against my country, my town or city against my region, my family against my town, me against my family.’ What we see here is that unity is only truly reliable when a greater force of repulsion is present. Even those insufferable kinds of people filled universal love show this by the scorn they heap upon those that deny their vision and the hierarchies of condescension they create from those who follow the doctrine they espouse down to ‘the unenlightened’ who do not.

Some schools of thought in speculative realism, especially Harman’s Object Oriented Ontology, adopt a view more closely to what I am getting to with repulsion. Despite being more on the process theory side of things (as, I think increasingly, am I), Bryant talks about such issues as well. These thinkers speak not only of withdrawn objects and and the core of objects being inaccessible, but also of the real material basis for divergence between objects in thought. As stated before, I myself am not into the metaphysical side of things enough to bother as much with this aspect, but I do think that one can acknowledge that everything is interconnected through processes while still rejected the idea that ‘all is all one’-unless that one thing is base struggle. Interconnections need not mean monism or uniformity. In fact, rivalry and division are also a form of being connected to things. A kind of connection through repulsion-which is still a type of relationship of course but one of many rather than of one.

All of this is to quibble with semantics of course. But I feel for those of us who study the competition of societies vis-a-vis each other, or the unpredictability of change in any form, it is a useful rhetorical tool to have. It also has the positive value of being able to repel hippies and anti-intellectual ‘its like, all one mannnnn’ type people who deny the very real existence of power struggle and the importance of divergences in thought while still engaging with some concepts common in discourse that are not themselves wrapped up in Platonic forms or absolutism.

Or in other more flippant words, maybe interconnections through repulsion is the true, ahem, ‘middle path.’

7 thoughts on “The Universe of Repulsion”